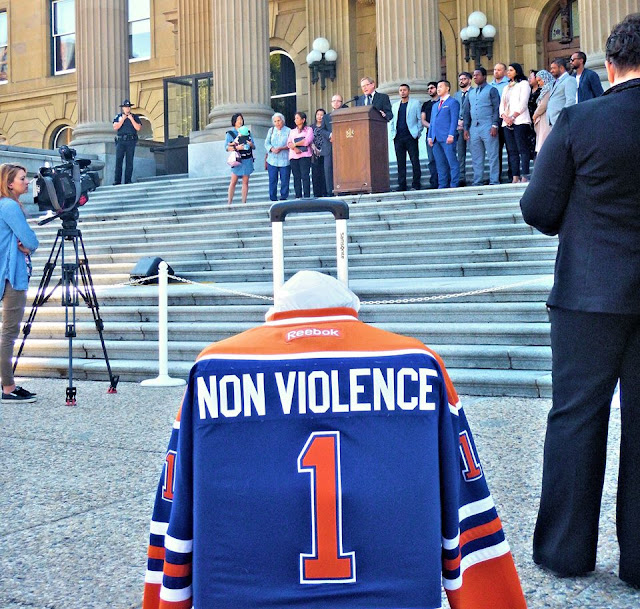 Not a Bystander art project #Oiler Non-Violence Jersey retired, gift to the Hon David Eggen, former #NDP Education Minister with note of thanks for making Alberta Schools safer... The Jersey was used to encourage #Oilers fans to take a stand against hockey fan violence, bullying.

Posted by Doug Brinkman at 8:28 AM No comments: 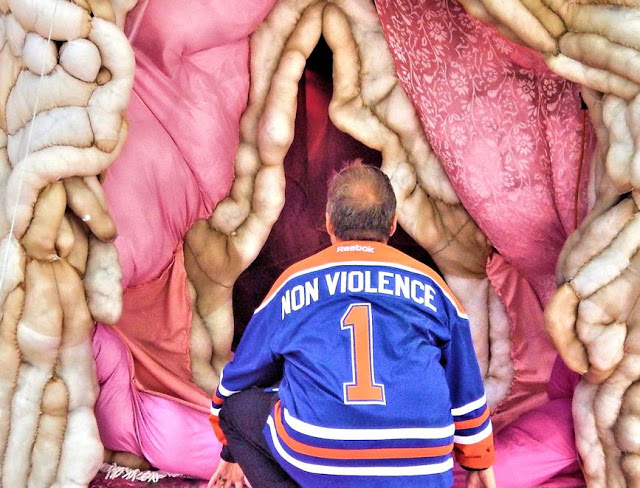 2017 The Works: Oiler fan wearing a Non (sports fan) Violence Jersey standing before a giant... use your imagination.

My Oilers Jersey was purchased in the pring of 2017 after the Edmonton Oilers were eliminated from the Stanley Cup playoffs.  I wore it outdoors throughout the year in public during rallies and protests relating to violence towards women, womans march, missing and murdered and sometimes up in the public (not empty press) gallery during Legislature sittings. The Non Violence jersey was my 3rd installment to the 2017 Not a Bystander art project that focused in part on sport fan violence during playoffs and championship games.  I retired the Oilers Jersey this year during the Alberta Provincial election and gave it to our former NDP Education Minister David Eggan with a note that read "thanks for making Alberta schools safer."

We are all Tina Fontaine - 10 k walk Missing and Murdered

"Inside and Out" Installation by Artist Kasie Campbell
Posted by Doug Brinkman at 5:28 AM No comments: